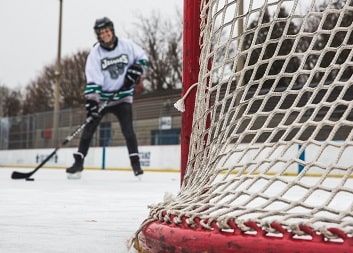 In hockey, the game of the team leaders is of great importance, since the result often depends on their form and performance. Bookmakers also offer bets on this gaming component. The main option is the choice of performance according to the goal + pass system, as well as the player who can throw the puck into the opponent's goal. But recently, a large number of varieties of bets have appeared on individual hockey players, each of them has its own characteristics. When choosing the best option, it is worth analyzing a large number of different factors.

In hockey, it is difficult to score at a stable level in every match, and it is even more difficult to make takes and hat-tricks. Therefore, the bookmaker usually offers to make a choice for the total of pocketed goals over 0.5. It is usually suggested to choose this option exclusively for the attackers. Several key players are selected who have the best chances to hit the opponent's goal.

Here you need to take into account how exactly the hockey player performs in the season, in which situations he usually differs. For example, a large number of goals in a team are scored by players who play well in the minority. As strange as it sounds, they are really effective, but it is dangerous to bet on their puck in every match. But if there is confidence that the handicap will be minimal, the opponent will remove the goalkeeper, the chances of a goal being scored increase. For example, last season, CSKA striker Mikhail Grigorenko was invariably different for several meetings in a row, scored into an empty net, but it is impossible to put it on stream. It is necessary to bet on a goal of such a hockey player if the opponent will most likely try to win back and leave his goal unprotected.

Another factor that has a bearing on the performance of players is power play. This is a great chance to score the puck, but you need to evaluate the character of the game and the style of the opponent in advance. For example, there are teams that play very carefully and practically do not give the referee a reason to stop the game and resort to sending off.

If the opponent has few penalty minutes for the season, then it is better not to bet on the abandoned puck from the players of the special teams. If, on the contrary, the number of penalties goes off scale, then we can say with confidence that one of the attempts will certainly be implemented by the player of interest.

If you do not start from situations with the game in unequal compositions, the following factors must be taken into account. First, it is worth betting on the team's scorer, only as long as all the pucks are followed in each match. In this case, the player on the courage, he often scores incredible goals because the mood is overwhelming. But if the streak of scored goals is interrupted, it is better not to bet on this outcome, since the players do not always quickly regain their scoring instinct. Finally, it is important to pay attention to principled and comfortable opponents. Some hockey players are not particularly successful during the regular season, but on one of the teams they are real “specialists”. You need to pay attention to whether the player was effective in previous head-to-head matches.

Much really depends on the opponent's style, since in some cases it is possible to flirt with the “grassroots” total for the attackers. For example, it has already been said that some opponents try to keep their gates intact and saturate the defense, trying to respond with counterattacks. In this case, it is very difficult for the attacker to distinguish himself, since there is incredible traffic on the patch. Usually the team resorts to shots from defenders, which often reach the target. It is difficult to hope for a crazy ricochet, so if the opponent closes down and practically does not allow combining, it is better to bet on the total less than 0.5 in relation to the less productive offensive players.

The goals scored are far from the only indicator that you can bet on. Scored points are the more common outcome, so the line is much wider here. In addition to the offensive line players, defenders are always used, who often turn out to be in the role of an assistant. Of course, there are defensive players who themselves score a large number of pucks, but here any scored point is considered that plays into the hands of the user.

Again, you need to pay attention to the game in the majority, since in good teams the lion's share of points are gained by the hockey players who are part of the special implementation team. Therefore, if there is confidence that the opponent will definitely foul, you can flirt with the performance of the defenders. This is due to the fact that the defensive players themselves often score from the blue line, or the striker corrects, but even then the defensive point is sent to the defender. In addition, if you look at the manner of playing the majority, the overwhelming number of teams constantly involve players who are on the back line.

It's even easier to bet on the performance of the defenders than it is on the forwards. This is because the majority brigades in many teams use a four-striker formation. Then only two defenders take part in the implementation, usually with a good pass and a powerful throw. You can confidently flirt with a total of more than 0.5 points against such hockey players.

The next important point is the performance of the hockey playmakers. There are individual players who get the lion's share of the playing time and literally orchestrate the team's attacks. They play in the majority, therefore, they constantly have the opportunity to distinguish themselves or give an assist. It is very convenient to win over 0.5 points against such players, but the option with 1.5 points is also offered. You should bet on this outcome only when you are confident that the team will score a lot.

In relation to the players, it is proposed to play a handicap of one in relation to the other in terms of the points scored. Here again it is necessary to evaluate in which brigade the hockey players are, if they play in unequal compositions. It is very important to watch how the performer plays, what functions are assigned to him. Often the attackers of the same link are compared, who at the same time take on different responsibilities. If one of the players constantly plays in the minority and comes out in the holding link, then he is more defensive, it is difficult for him to score. Therefore, he can lose to almost every opponent with a different role. It is very important to pay attention to this.

In addition, even the most productive player of the outsider team can concede to the representative of the favorite, since the opponent usually does not allow many chances to be created near his goal. But at the same time, it is important to understand that if anyone will excel in the composition of a weaker team, then this is just the leading hockey player who will try to do everything to prove himself from the best side. In addition, if the opportunity suddenly turns up to play the majority, then he will again get the opportunity to score points, so you need to be very careful in such fights, be sure that the favorite will not miss at all, and the chosen strong team will have time to distinguish himself with effective action.

The line of bets on performance is becoming wider, so in order not to be mistaken in choosing an event, you need to take into account several important factors at once. It is important to analyze the opponent's playing style, as well as look at the number of penalty minutes. Estimate the amount of playing time for the selected hockey player, see if he comes out with the majority. Do not forget about the effectiveness of recent meetings, since hockey players play better on courage, the chance to score a puck or give an assist is increased several times. Good luck with your bets.